The PC is not a single unit.

It’s a collection of components and units that function together to form a working, powerful workstation setup. But what happens when one of the parts performs inadequately and holds other parts of your system down from their full capability? That’s what we are gonna explore today.

To simply explain bottleneck in layman’s terms – Imagine an assembly line. First, in the line is a guy called CPU (nicknamed AMD Athlon X2) who provides materials to another guy called GPU (nicknamed RTX 3090). What happens is, as long as the production line is of a low-end product, something like GTA San Andreas, it’ll be able to provide resources without any malfunction. However, as we move on towards higher-end products, such as Battlefield 5, we’ll notice that our CPU guy is getting too worked out because he is old and out of date. He can’t send resources to the young GPU guy in due time which causes the GPU guy to stay idle and thus he cannot perform at his best. The end product, thus, is delivered late and is very laggy.

That, dear reader, is the meaning of bottleneck.

A bottleneck is basically when one of the components of your PC is holding back the performance of another component, which causes your overall performance to be at a lower level than it can achieve. In the above example, the RTX 3090 was held back by the AMD Athlon X2 because the processor is too out of date for the RTX series.

The term itself is derived from the fact that a liquid flows faster from a bottle without a neck opening than from a bottle that has one. As similar to how a bottleneck holds back liquid from flowing at its maximum speed, a ‘bottleneck’ in your gaming system can hold back your system from achieving its best.

A bottleneck can occur from many components, such as cooling, storage, or RAM. However, the two main components whose bottleneck you need to watch out for are – 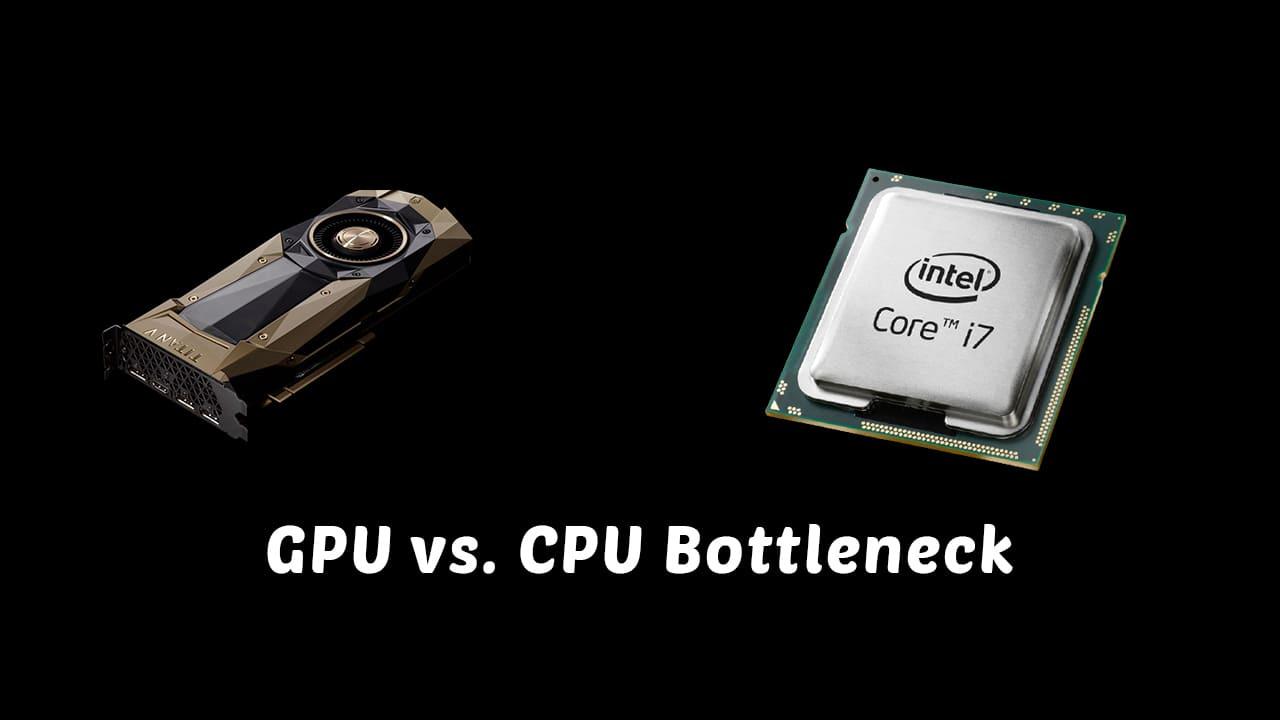 While playing a game, a CPU is responsible for sending packages of data-information to the GPU per frame. This information is basically what texture to load, physics, animations, and what objects to render for the next frame. In an idle situation, let’s say a CPU is able to provide 60 frames of data per second to a GPU which then processes it and shows it on your monitor. However, in the case of a CPU bottleneck, a CPU will be on the weaker side than that of a GPU. What this means is that the CPU would only be able to provide 45 frames of data per second to the GPU which is fully capable to handle 60. Thus, the GPU spends some time in an idle state which is not desirable at all. The GPU is not being able to provide 100% of utilization because the CPU is holding it back.

The reverse can also happen, in a case where the GPU is so old that the CPU is not getting worked at its full state.

You never want your CPU to bottleneck because while a GPU is only utilized during gaming or graphic-intensive tasks such as animating, video editing, etc., a CPU is utilized at all times by your background processes as well. If your system background processes don’t get enough resources, your system might malfunction. This is a rare case, but something to watch out for anyway. A prolonged CPU bottleneck may end up ruining your whole system.

On the other hand, if a GPU is getting bottlenecked that’s excellent because you are getting every drop of performance out of your card, which is what they are designed to do. If the bottleneck is too severe for the newer titles, you can consider buying a new graphics card to update your system. However, that’s only when your GPU bottleneck halts your in-game performance to the point where it’s unplayable.

Other Types of Bottleneck:

As stated earlier, a bottleneck can occur from your RAM, cooling, and storage components too. Let’s see how we can fix them –

RAM bottlenecks occur when one of your RAM chips has a lower frequency than that of the other RAM chips. Thus, a 1333Mhz RAM in a dual set with the other one being 2166Mhz will force the 2166Mhz ram to lower its clock frequency to 1333Mhz, thus failing to achieve its best performance. To fix this, simply buy a new and better ram.

When you spend thousands on buying that beast processor, don’t cheap out on buying an equally competent fan and thermal paste as well. If your CPU gets overheated it’ll bottleneck and will try to lower its heat at the cost of performance. It’s always a good idea to change your thermal paste once a year and get a good cooling fan if your CPU temperatures get too hot.

The bottleneck that occurs from storage is more of a luxury issue. Simply put, there are two types of drives out there – HDD and SSD. SSDs are significantly faster and allow for phenomenally faster loading time. On the other hand, HDDs are slower but allow more storage

So this was all about Bottleneck, I hope we were able to explain you things in the best and simple way possible, in case you got any query do let us know with the help of the comment section given below, we will be happy to help you out, thank you for visiting our blog.